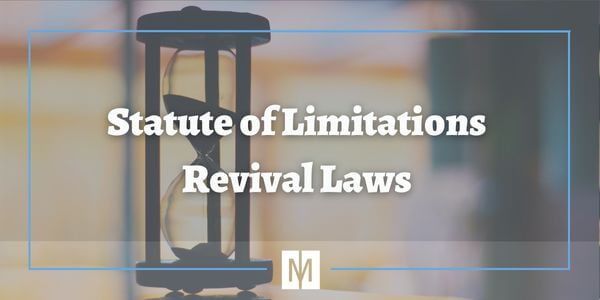 The Rise of Statute of Limitation Revival Laws

Statute of Limitation Revival Laws create what are referred to as “lookback windows”. These allow those whose statute of limitations for civil claims have expired to file suit against their perpetrator, or the organization that allowed the abuse to happen.

One of the most prominent examples of this would be the New York Child Victim’s Act. Almost 1000 lawsuits have been filed so far. These are lawsuits that no one would have been able to file given the expired statute. But, why are civil claims for sexual abuse not filed within the original time limit?

The Problem: There’s Not Enough Time to File Civil Claims for Sexual Abuse

The criminal statute of limitations for sexual abuse has been removed in Missouri and Kansas. The criminal court system typically results in jail time for the perpetrator. This can give victims a sense of safety and justice, but little is done to compensate for the mental, emotional, and physical injuries sustained. Civil courts offer recovery for victims whose lives have been ruined by abuse.

An Unrealistic Window of Time

At first glance, 5 to 10 years may seem like enough time to bring a party to suit, but the reality has indicated otherwise. It can take much longer for a victim of child sexual abuse to come forward. They have to first understand what happened to them, then have the courage to open up about the abuse, and finally to take legal action against their abuser. This can take many years, if they ever disclose the abuse at all.

“Researchers estimate that 38% of child victims disclose the fact that they have been sexually abused. Of these, 40% tell a close friend, rather than an adult or authority. These “friend-to-friend” disclosures do not always result in reports. This means that the vast majority of child sexual abuse incidents are never reported to authorities, though research suggests that disclosure rates to authorities may be increasing.”

The average age to disclose childhood sexual abuse is 52 years old. By then, a victim’s statute of limitations in Missouri will have been expired for 21 years. While the rise of the #MeToo movement has given more people hope and courage to come forward, it is still an incredibly difficult feat. By the time they move forward with legal action, there is often nothing that can be done civilly. Victims often find themselves unable to pursue compensation due to an unrealistic window of time to file civil claims.

It can be easier to pretend the abuse never happened, rather than face the pain, fear, and shame that comes with admitting abuse. Especially if the perpetrator was someone the child trusted.  Three out of four adolescents who have been sexually assaulted were victimized by someone they knew well.

Perpetrators will threaten the victim that they will harm them or their family if they disclose what happened. That fear can last well into adulthood. There is also the fear they will not be believed if they do open up. Some even fear the consequences that will follow. They may fear that they, or even a trusted abuser, will be in trouble. This is often true for victims who have been groomed by their perpetrator.

Many times, victims do not want anyone to know what happened due to feeling embarrassed and disgusted. Perpetrators will feed into the idea that the victim somehow “caused” the abuse to happen.

The memories of the traumatic event can be repressed altogether. Later in life there may be a triggering event that will recall the events. Repressed memories are still recognized by the courts as a way to extend the statute, but it is still a grey area within the law.

Child USA states the goal of these revival laws are to:

The filed lawsuit goes through the same procedures as if it were filed within the previous window of time. There is still due process, the burden of proof is still put on the plaintiff.

The hope is to give victims the opportunity to receive compensation for a lifetime of pain and suffering, and to motivate organizations to improve their policies and screening processes for new employees.

This year many statutes of limitation revival laws have been adopted by a host of states. Each have different guidelines and restrictions on who can bring a claim, and who can be sued:

In addition, many states are reforming laws that give victims more time moving forward with a civil suit.

What Can We Do Now?

Once these look-back windows close, what happens? By opening and discussing the issue of sexual abuse, and why these laws are needed, it allows opportunities for people to learn more about the legal issues surrounding sexual abuse.

We can educate ourselves, friends, and families about warning signs of sexual abuse in children. By being able to identify these warning signs, we can stop the abuse and help the child more quickly.

We can continue to promote education to the public of the civil rights that victims of sexual abuse have. The more that information becomes common knowledge, the easier and faster it will be for victims and their families to seek legal help. Our attorneys have created a booklet just for that purpose.

Finally, we can fight for longer, or the elimination of, civil statutes for sexual abuse. Currently in Missouri the statute of limitations for filing a lawsuit against a negligent company is 5 years. But, Senate Bill 96 aims to shorten the statute to 2 years. Simply, this bill hurts those who are already suffering, and keeps corporations from being held accountable.

With new states adopting look-back windows and revised civil law, it will be interesting to see how Missouri and Kansas will adopt their own changes in the years to come.