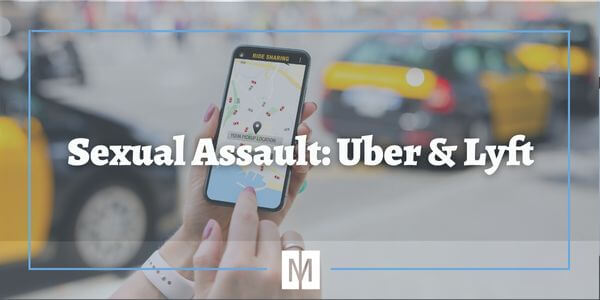 In recent years, thousands of riders and drivers of Uber and Lyft have fallen victim to harassment, unwanted physical contact, indecent exposure, sexual assault, and rape. For instance, Uber reported 3,824 incidents of sexual assault and misconduct in 2019 and 2020. Of the 998 incidents of sexual assault reported in 2020, 141 of those incidents were reported as non-consensual sexual penetration or rape. For both 2019 and 2020, 91% of victims were passengers with 7% drivers. The complete safety report issued by Uber for 2019-2020 can be found here.

Lyft also recently issued its first safety report providing statistics on the reporting of sexual assaults by passengers using the ridesharing platform. Lyft’s report documented 4,158 incidents of sexual assault from 2017 to 2019. More than half of the reports made in 2019 consisted of “non-consensual touching of a sexual body part” and 156 other passengers revealed they experienced non-consensual penetration. Consequently, more than a dozen women filed lawsuits against Lyft in 2019 alleging Lyft failed to implement basic safety measures to protect against the risk of sexual assaults. Lyft’s full report can be read here.

Sexual Assaults in Uber and Lyft

Ridesharing companies compete with taxi cabs in the transportation industry, but sexual assaults occur more frequently in ridesharing. Why?

Until recently, most ridesharing companies only performed background checks on drivers before hiring them. No action was taken to monitor drivers after hiring. Now, Uber claims to utilize automated technology that regularly screens driving records and criminal history, while Lyft now requires screening of all drivers with initial and annual background checks and monitors criminal and driving records.

If you or a loved one has been assaulted while using a ridesharing service, you may consider taking legal action. It is important to understand the difference between a criminal and civil liability case within the justice system.

In this context, the criminal case is handled by a prosecuting attorney and is brought against the individual perpetrator who is alleged to commit the sexual assault. While some restitution or financial compensation may be awarded to the victim, criminal courts are a poor avenue through which to pursue it. This is because the purpose of the criminal justice system is to protect society as a whole, rather than advocate for individuals’ rights.

For that reason, the civil justice system may be the best avenue for victims to hold the perpetrator, and the ridesharing company who employed them, responsible for damages. However, certain legal complexities make the pursuit of civil claims arising from sexual assault in ridesharing very difficult.

First, while insurance policies generally cover claims against an Uber or Lyft driver who was negligent in causing a collision, the same cannot be said to be true for claims of sexual assault. Most insurance policies have “exclusions” that negate any obligation by the insurance carrier to pay for losses arising from intentional or sexual acts.

Second, it remains uncertain whether companies like Uber and Lyft are responsible for the acts of their drivers under traditional legal principles of respondent superior, which is generally understood to mean “let the master answer”. Under respondent superior, an employer may be held liable for the acts of its employees where the conduct was committed within the course and scope of the employment. Most rideshare companies designate their drivers as independent contractors, rather than employees. Under this approach, companies like Uber and Lyft are shielded from legal responsibility based on the acts of the drivers it employs.

In 2020, the U.K. Supreme Court addressed the question of employment status concerning employment benefits for Uber and Lyft drivers, which includes things like health insurance, minimum wage, worker’s compensation insurance, sick and vacation leave, and safety regulations. In that decision, the high court ruled that drivers are employees, not independent contractors.

While rideshare drivers in California experienced a similar victory in 2020, it was quickly eviscerated when Proposition 22 was passed. Given the uncertainty of ongoing court proceedings and pop-up legislation, it remains unclear what legal recourse is available to sexual assault victims.

Even where the employer-employee relationship is found not to exist, however, it remains viable that ride share companies are responsible for notice-based claims, such as negligent hiring, retention, or supervision. To prevail under such theories, the victim must show that before the assault, the rideshare company knew, or should have known, that the driver had a propensity to commit sexual violence or behave in sexually inappropriate behavior. This is where enforcement of the above-discussed safety policies may come into play. While the implementation of such policies is most certainly a step in the right direction with hopes for increased safety for the public and prevention of future crimes, it remains unknown how consistently the programs are being followed for all drivers.

Our sexual assault attorneys at Monsees & Mayer, P.C. have been trauma trained. And while we recognize that no dollar figure can truly account for the life-long trauma caused by sexual violence, it is the sole remedy authorized by our country’s civil justice system. We have seen first-hand how money has changed victims’ lives because it not only provides a sense of justice but also provides access to health services they would not have been able to afford before.

We are here to answer any questions you may have.  Contact us today.