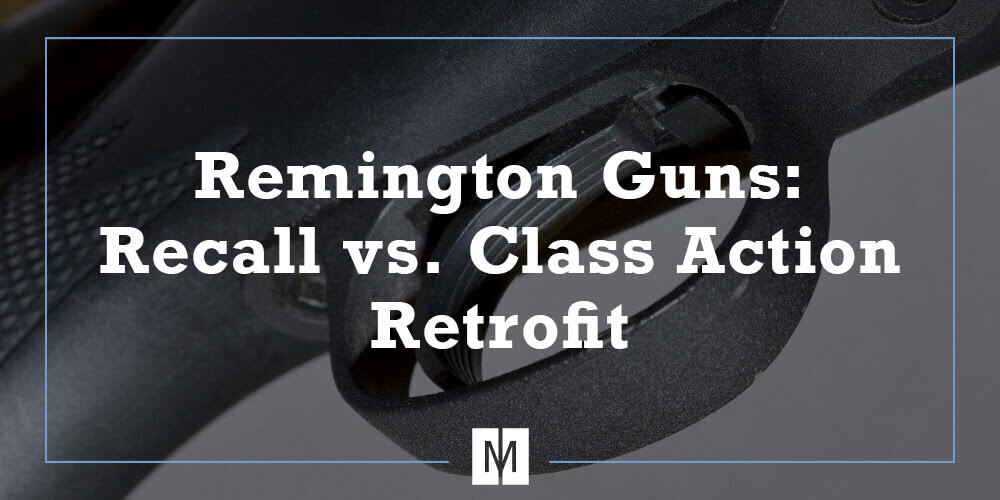 Timothy Monsees, of Monsees & Mayer, is one of several attorneys representing the class of individuals who are suing Remington Arms Company LLC. The class is suing Remington for defects in a host of bolt-action rifles. These rifles are equipped with the Walker Fire Control, or some closely related variation. These rifles have demonstrated a nearly 70-year history of firing under certain circumstances, even when the trigger is not pulled. Understandably, this is a horrifically dangerous condition, and adds dramatically to the inherent dangers of firearms. A settlement has been negotiated with Remington that will result in a retrofit of most of their bolt-action rifles.

What is a retrofit? A retrofit mainly differs from a “recall” in what it suggest or implies about the urgency of a fix. A recall often is pursued when products have defects of manufacture, design or can be potentially harmful. Whereas the term “retrofit” is used by corporations to suggest the availability of new technology that enhances the older design. In this case, Remington has re-designed the triggers in many of its bolt-action rifles. The new designs eliminate a “trigger connector” that lawsuits have alleged for over 30 years is defective and results in dangerous, unintended firing of the rifles. Remington has agreed to retrofit its rifles without confirming or admitting that the rifles are dangerous. However, lawsuits and complaints contend otherwise. Remington has received thousands of consumer complaints. Each stating the rifles equipped with some variation of the Walker Fire Control are defective and dangerous.

Advocates for the dangerous conditions of Remington bolt-action rifles

The attorneys at Monsees & Mayer, P.C. have been active advocates for the dangerous conditions of Remington bolt-action rifles. If the settlement is approved, owners of Model 700, 710 and 770 rifles will have the opportunity to have their rifles retrofitted with a safer trigger. This retrofit will be done free of charge. Some older model firearms including the Models 600, 660, XP 100, 721 and 722 are so old as to make a retrofit either impossible or grossly expensive. Those rifles, regrettably, cannot be fixed. However, owners of such rifles should inquire with a reputable gun smith about the availability of after-market triggers which may address the danger.