What You Should Never Say After a Car Accident 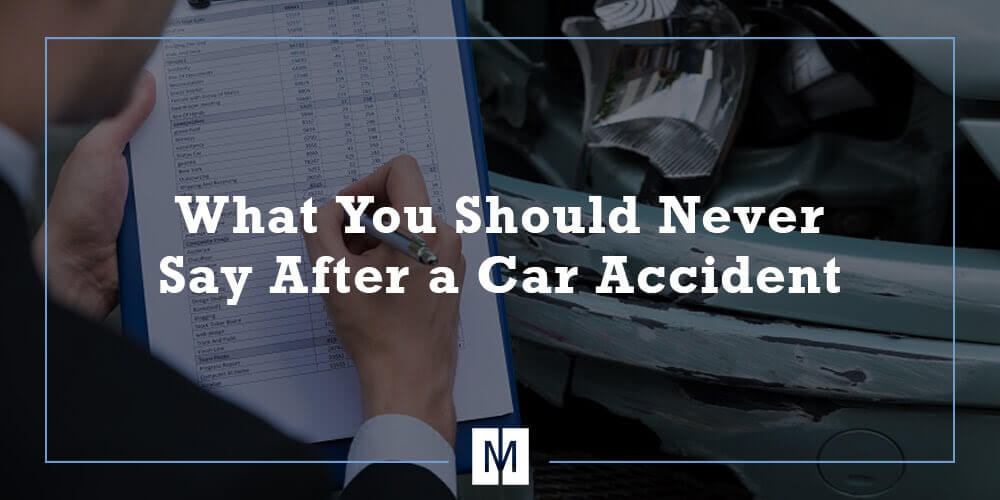 Believe it or not, if you are in a car accident, there are going to be more than a few people at the scene. For example, the at-fault driver is going to be there, as well as any other drivers who were involved and all the passengers. Other people at the scene include first-responders and witnesses to the accident. If you are in a car accident, the situation can become frustrating quickly. Not only is there the potential to say something to someone nearby, but you may also post something on social media that is damaging to a lawsuit you file in the future.

If you want to avoid any issues, it is best to be very careful about what you say directly after a car accident – both in person and digitally. Some tips to ensure you don’t say something incriminating can be found here.

Never Say “I’m Sorry” to Anyone

After a car accident occurs, the world “sorry” doesn’t need to be a part of your vocabulary. This may be taken wrong and thought of as an admission of guilt, which can be used against you down the road. While this can be a tough habit to break, it is something you need to avoid at all costs after being involved in an accident.

What if the Crash was Your Fault?

Even if you believe that your actions caused the accident, you still should not say “sorry” while at the scene. After all, you don’t have all the facts. If you hit someone from behind because you believed they were moving, it may seem like your fault. However, it may turn out their brake lights were out or that the road wasn’t paved properly. These are all factors that have to be determined to figure out who is to blame.

What You Can Say to the Other Driver

After exiting your vehicle and checking on your passengers, you need to find out if the other driver and passengers have suffered an injury of any kind. It doesn’t matter who is at fault at this time; you need to see if anyone is hurt and call for medical attention, if necessary. If the crash was the other driver’s fault, it might be easy to get angry; however, that is not the time for it. Stay calm and make sure to show concern for the welfare of everyone involved.

Besides checking for injuries, there is not much else you need to say to the other driver. Make sure to exchange names, contact information, and insurance information. Don’t accuse or apologize, but instead wait for the police and take pictures of the accident scene.

Remember, posting on Facebook and other social media channels can be just as damaging as saying something incriminating in person. It is best to leave details about the accident and other related information off the internet, at least until the case has been settled. If you do wind up filing a personal injury lawsuit, be sure to hire a quality personal injury attorney in Kansas City.