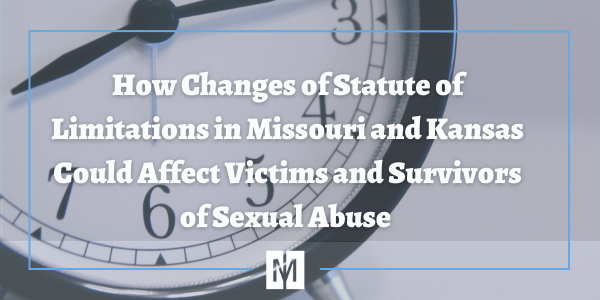 All claims or lawsuits have time limits, or deadlines, for when they can be filed called statutes of limitation. In most cases, the time frame begins when the injury occurred. But for events that happen over time and those that involve minor children, like sexual abuse, calculation of the time frame can be challenging, and existing statutes of limitation can be prohibitive.

Many child victims, who are now adults, miss their legal window to bring criminal charges or file a civil claim against their perpetrator and/or other responsible individual or organizations. One of the dominant factors playing into this lost opportunity stems from a person’s natural mental and emotional response to trauma, commonly referred to as repressed memory. Essentially, the brain squashes the memory to reduce or eliminate re-traumatization to the victim. When this occurs, the abuse is forgotten, which results no reporting at all, or delayed reporting when they are older. Victims and survivors often have an experience that triggers an event, bringing back memories of the abuse they endured. When this happens, victims and survivors frequently require counseling or therapy to explore the extent of the repressed memories and learn how to cope with the re-traumatization. To give victims a fair opportunity to seek justice, statutes of limitation reform is critical and organizations like ChildUSA and Metropolitan Organization to Counter Sexual Assault (MOCSA) are leading the charge.

Currently, in Missouri the civil statute of limitation for childhood sexual abuse is age 31 for claims against the perpetrator, but age 26 for claims against non-perpetrator defendants. In Kansas, claims arising from childhood sexual abuse must be brought before the victim turns 21. However, there are a few bills being presented on both sides of the state line that could significantly alter the statutes of limitation for victims, both good and bad.

There are two main bills that were filed during the 2022 session that could impact civil cases in Missouri.

In Kansas, there were three bills filed this session that could impact civil cases.

With the adjournment of the Missouri legislative session on May 30, 2022, it is unlikely that these bills make it to the governor’s desk in 2022. However, lobbying teams from MATA, Child USA and MOCSA continue to monitor each bill and advocate for favorable reform for victims and survivors in both Missouri and Kansas.

Several states have passed legislation similar to what has been proposed in Kansas, either extending or eliminating their statutes of limitation for civil claims arising out of child sexual abuse. Missouri’s current statute of limitations, age 26 for third party claims, often does not allow victims enough time to come forward with their story, eliminating their right to pursue justice.  SB 631, legislation proposed in Missouri, would shorten the time limits for these claims, making it more difficult for victims and survivors to have their voices heard.

Learn more about the latest in statutes of limitation reform and the important work Child USA is doing to drive change.