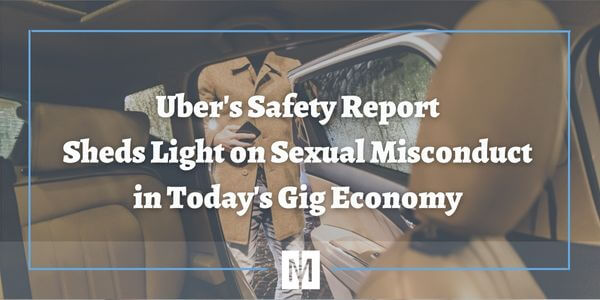 Uber, the American-based, multinational, peer-to-peer, ridesharing service, was recently put on blast after the disclosure of their much-anticipated 2018 safety report. The report unearthed more than 3,000 reports of sexual misconduct throughout the year in the United States alone.

Out of the company’s 1.3 billion rideshares last year, 235 rapes were reported. The multi-billion-dollar conglomerate was quick to point out that both riders and drivers are included in that figure and that a portion of those assaults took place between two riders sharing a car.

The report, which was released on Thursday, December 5th and is being praised as the first of its kind, offering the public a gruesome glimpse into the murders, sexual assaults, and traffic-related deaths that were peppered throughout the billions of rides provided in the U.S. through the use of Uber app. Uber believes it is a show of good faith on its part to be more open about its safety record which has been under scrutiny for years.

In 2017, Uber came clean about the 2,936 sexual attacks that were reported during the year, 229 of which were rape, out of a total of 1 billion requested rides here in the United States. Uber rests its overall figures on reports from drivers and riders, indicating that the exact totals are probably much higher since sexual attacks frequently go unreported.

Uber CEO Dara Khosrowshahi was quoted as saying, “I suspect many people will be surprised at how rare these incidents are; others will understandably think they’re still too common,” in a recent Tweet where he is clearly still struggling to wrap his head around the concept that even one rape is one too many.

Uber and its ride-sharing adversary Lyft have both endured unrelenting faultfinding and nearly non-stop accusations that the companies are not doing nearly enough to protect either of the groups of people that have made them their millions.

Back in September, a woman filed a lawsuit against Lyft after she was kidnapped by a driver at gunpoint. He then drove her across the state lines, where he raped her along with two other men. When she notified Lyft of the sexual assault, the company responded by “​apologizing for the inconvenience” and made sure to inform her that she was still expected to pay for her ride.

Both of the ride-sharing companies, Lyft and Uber, have established partnerships with various safety groups and sexual assault prevention networks, and have praised themselves for their own efforts concerning the background check procedures for potential drivers. Most people feel that these are empty gestures offering far too little, far too late.

Uber has issued a statement saying the company intends to publish its safety report every other year starting in 2021.

A spokesperson for Lyft offered reassurances that the company “remains committed” to publishing its safety report, but was unable to say when the public might expect to see that.

Many people believe that 80- to 90 percent of the reported sexual assaults might have been prevented by simple security devices such as active cameras in each car and the company’s full cooperation when it comes to reporting every single assault.

One of the attorneys representing some of the Uber assault victims stated that one of the primary issues with these companies is that they routinely try to conceal the actual number of sexual assaults that take place on their watch.

The fact is that sexual assault ruins lives. An unethical and unlawful action of this magnitude will result in immeasurable psychological trauma and emotional wounds that never fully go away, no matter how much time has passed. The harm that is done is often unfathomable.

It takes a lot of strength to come forward as a victim of sexual assault in Missouri. Telling someone what happened to you is utterly terrifying, humiliating, and traumatizing. Sexual assault is often traumatic for the victim but also for the whole family. The sexual assault attorneys at Monsees & Mayer, PC are here to listen to you in a compassionate and judgment-free environment.

You deserve a skilled and compassionate sexual assault attorney who will work with you through this difficult and complex process. We realize how scary filing this type of lawsuit can be. You might be anxious about the consequences that a lawsuit will have on you and your family members.

If you or someone you love has been the victim of sexual assault that occurred because of an Uber or Lyft ride, contact the rideshare sexual assault lawyers at Monsees & Mayer, PC today to schedule your free consultation. You may be entitled to compensation for your injuries.  At Monsees & Mayer, we are dedicated to providing our clients with the utmost respect and confidentiality.