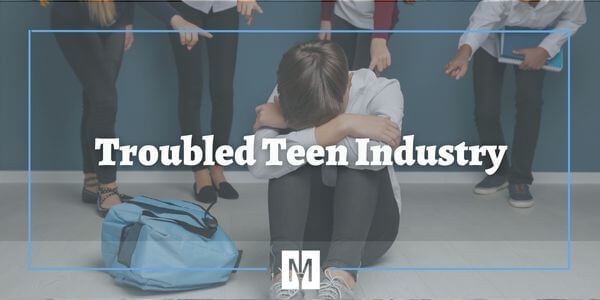 The “Troubled Teen Industry” is an industry made up of facilities designed to reform young people’s behavior into something more desirable. They include behavior modification facilities, wilderness therapy, boot camps, “tough-love” facilities, and more. Offending behavior could be disobeying their parents, drug use, or playing too many video games.

Parents who feel as though they are unable to control their “troubled teen” are promised by these facilities that they will return their child back properly disciplined and respectful. These methods of discipline are often rooted in a Synanon philosophy – a cult which pioneered the use of harsh behavioral modification techniques. Often, parents are sending their child off to what could be years of abuse, with a lifetime of trauma.

What helps perpetuates this abuse is the lack of legislation that allows many private facilities operate without any state oversight. If a facility does close due to allegations of abuse, it may be only temporary. Many will just move to a new state, change the name, and start again. In Missouri, faith-based organizations do not need a license to operate, as they are a considered a non-profit that receives no state funding.

One Missouri facility that has gained recent national attention is the Circle of Hope Girls Ranch. The state of Missouri began an investigation into Circle of Hope this August, following allegations of physical, emotional, and mental abuse.

At least 25 girls were removed from the facility, whose goal is to “help young ladies who were destroying their lives through poor choices and behaviors, change their future”. Unfortunately, many of the residents’ futures are now ones filled with life-long problems stemming from months, or years of abuse.

The Circle of Hope owners’ daughter, Amanda, has been a vocal advocate against the abuse at her parent’s ranch for years. She took her advocacy to Tiktok, where it gained momentum. Amanda explains, “They have been working in the troubled teen industry for 30 years, so it’s been 30 years of abusing kids. I just wish people would understand that even though they’re troubled teens, they’re not teens anymore. They’re adult women.”.

Many former residents have shared their experiences with Circle of Hope Girls Ranch for years, but only now are investigations and lawsuits being filed. Why has it taken this long for something to happen?

As previously mentioned, the lack of legislation to properly regulate and oversee institutions of this nature is a large factor. In addition, the nature of how the facility is ran increases the difficulty for the residents to report abuse themselves.

These facilities limit, control, and distort any relationships the child has outside of the Ranch. They are under constant supervision, and all outside communication is monitored. If the abuser is always listening along on the phone call back home, the survivor may not feel as though they are able to disclose the abuse.

Even if they are able to tell their parents, a friend, or law enforcement about the abuse, there may be no further action. Having already been labeled as a “troubled teen”, their credibility is diminished, and will be used in defense of the institution perpetrating the abuse. On top of that, there are additional obstacles to reporting that survivors of any situation face:

Confusion: Perpetrators take advantage of a child’s limited perception and general trust in adults. Many times, it is not until they are older that they realize what happened to them was inappropriate.

Denial: It can be easier to pretend the abuse never happened, rather than face the pain, fear, and shame that comes with admitting abuse. Especially if the perpetrator was someone the child trusted.

Shame: Many times, victims don’t want anyone else to know about the abuse. They feel embarrassed and disgusted. Perpetrators will feed into the idea that the victim brought the abuse upon themselves.

Circle of Hope Girls Ranch isn’t the first, and certainly won’t be the last facility that commits cruel abuse against children as long as the law allows it. Policy changes that allow regulations and oversight are key to preventing abuse like this in the future.

We can educate ourselves, friends, and families about warning signs of sexual abuse in children. By being able to identify these warning signs, we can stop the abuse and help the child more quickly. In addition, creating an environment that helps survivors feel more comfortable to disclose the abuse will result in getting the help they need more quickly. This means not being dismissive of allegations of abuse and believing survivors. Even those labeled as “troubled”.

If you have questions about sexual abuse or these teen facilities, contact our office today. We have resources available for victims and attorneys. Our sexual abuse booklet introduces victims to their options within civil courts. Our firm always appreciates the relationships we can build with other firms through referrals and co-council.