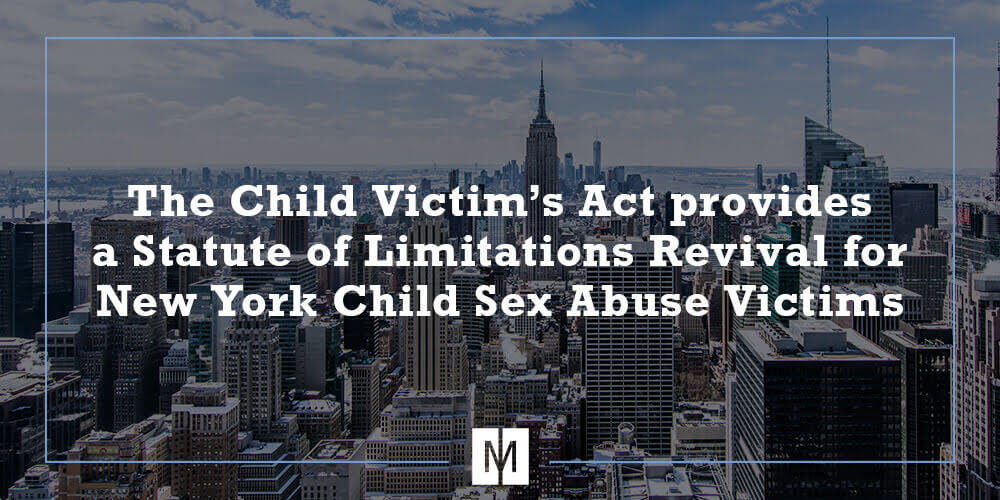 The Child Victim’s Act of New York was passed to help sexual abuse victims whose statute of limitations had run out of time. With the act, they would be able to sue their abuser—as well as the organizations that allowed the abuse to happen—within this year-long window of time.

How Does More Time Help?

Those effected by sexual abuse know how difficult it can be to file a claim within the small window of time the statute gives. This is especially true for those who were abused as a child. For many victims, it can take years to realize that what happened was wrong, and even longer to gather the courage to seek out what their legal options are.

Confusion, embarrassment, and even repression of the events all-together can result in years of silent pain and suffering. Filing a civil suit aims to compensate the victim for damages stemming from the abuse.

New York isn’t the only state passing Statute of Limitation Revival Laws. Washington D.C., Montana, Arizona, Vermont, Rhode Island, and New Jersey are also introducing windows of time for victims to sue their abusers. Each state has different guidelines and restrictions on who can bring a claim, and who can be sued:

What About Missouri and Kansas?

As of right now, it does not look like a SOL Revival for civil suits will be coming to Missouri or Kansas any time soon. In fact, there is currently a bill proposed to shorten the SOL for civil claims in Missouri. The Statute of Limitations for criminal claims of sexual abuse has been lifted for Missouri, when will civil claims be held at the same standard? The best we can do for victims right now is spread awareness of their rights, and promote the advocacy groups that support them. If you or someone you know has been a victim of sexual abuse, talk to us today about your legal options.