Sexual Abuse within the Boy Scouts of America 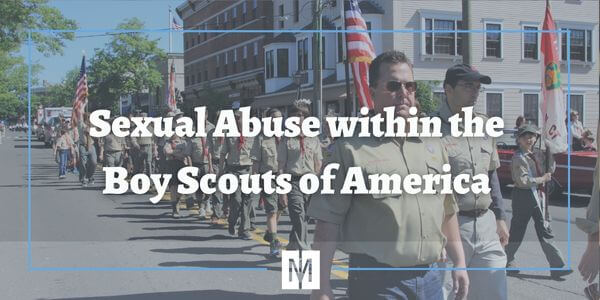 It is disturbing that so many incidents of sexual abuse of children have occurred in recent decades, however there is a glimmer of hope that organizations like the Catholic Church are becoming increasingly forthcoming in revealing the episodes and exercising more transparency to avoid future abuse. Unfortunately, the Boy Scouts of America are not nearly as transparent.

The numbers are horrifying. A sprinkling of reports of scouts sexually abused by leaders have come out in recent years, but as the reports become more and more common, a virtual tidal wave of incidents have come to light. In a recent report, the Boy Scouts of America had over 7,800 perpetrators among its leaders and volunteers. Over 12,000 children were victims. These figures were reported by Dr. Janet Warren, who is a professor in the Department of Psychiatry & Neurobehavioral Sciences at the University of Virginia’s medical school. The Boy Scouts hired Dr. Warren to analyze the prevalence of the problem, and has reviewed data between 1944 and 2016.

A Position of Trust

While the Boy Scouts denies it has ever knowingly exposed a child to a perpetrator, it is clear the Scouts have not done enough to screen its leaders and volunteers to identify and eliminate perpetrators. A Boy Scout leader is the classic example of a potential perpetrator of child abuse. Sexual abuse is nearly always perpetrated by someone the victims knows. It is frequently a person in a position of trust such as a youth leader, minister, doctor or daycare worker. Because of this, parents frequently, unwittingly ignore signs and discount reports from the children that something untoward is taking place.

Scouts frequently engage in activities that involve multiple nights away from home, creating ample opportunity for a deranged leader to abuse unsuspecting and vulnerable children. An outright report of abuse may not be the first sign from a child that he or she is being victimized. The first signs may be a reluctance to participate in what has been a longtime activity, such as scouting. Billy, who once may have thoroughly enjoyed weekend camp outs, may now increasingly come home despondent and express reluctance to go on future overnights. He may have unfavorable things to say about Scout Leader Dave, even though Dave had once been his favorite leader.

Looking at the Facts

Every allegation of abuse deserves respect, even if the potential perpetrator is “the last person you would ever think of”. Over 90% of the victims of child abuse knew of their perpetrator prior to the abuse. Observe. Report. Investigate. Keep these frightening statistics in mind when you think of the victims: