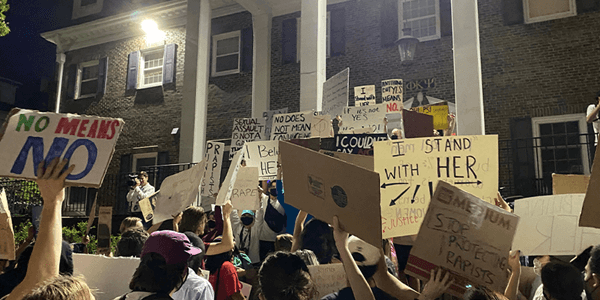 Sadly, colleges and universities are all too often the setting for sexual assaults. This too is the case at both on-campus and off-campus sorority and fraternity houses. Just last week, protests erupted outside an off-campus fraternity house at the University of Kansas. Scenes of hundreds of students rallying outside of the fraternity, calling for an end to self-described rape culture and for action from the University of Kansas, proliferated across various media outlets.

Reports have circled that an unnamed woman had allegedly been drugged and raped by a fraternity member over the weekend at one of the fraternity’s parties. The protests were championed by a campus organization that was formed to advocate for survivors in the Greek community. According to the organization, fraternities first need to work to root out possible perpetrators of sexual violence during their recruitment processes. Next, the fraternities need to be more intentional in their education around consent and toxic masculinity.

However, the reality is that change within the Greek system is oftentimes an uphill battle. This is in large part because the system is not necessarily designed for improvement. As you can imagine, any reforms or sweeping changes to the way the fraternity or sorority operates are often erased within a few years as leadership and membership turnover.

This problem is not a novel one. Sexual assault has remained a pervasive problem at KU and many other college campuses across the U.S. In a 2019 survey, “24% of undergraduate women at KU said they had been sexually assaulted during their time in college.” Nonetheless, the organization at the University of Kansas hopes that the protests provide validation for other survivors who did not necessarily get the support they needed.

It is true that criminal proceedings do little to truly help survivors. Even university’s Title IX hearings can leave the survivor feeling isolated and without any true recourse. By contrast, civil proceedings can provide an avenue for survivors to obtain the kind of compensation that will help them obtain all the appropriate care and counseling needed.

At the law firm of Monsees & Mayer, P.C., our attorneys have years of experience dealing with cases of abuse such as these. Our main goal remains to seek justice for those victims of these heinous acts. If an incident such as this was perpetrated against you or a loved one, do not hesitate to contact us today.  We are here to help.

Category: In the NewsSeptember 30, 2021
Blog Categories
Go to Top