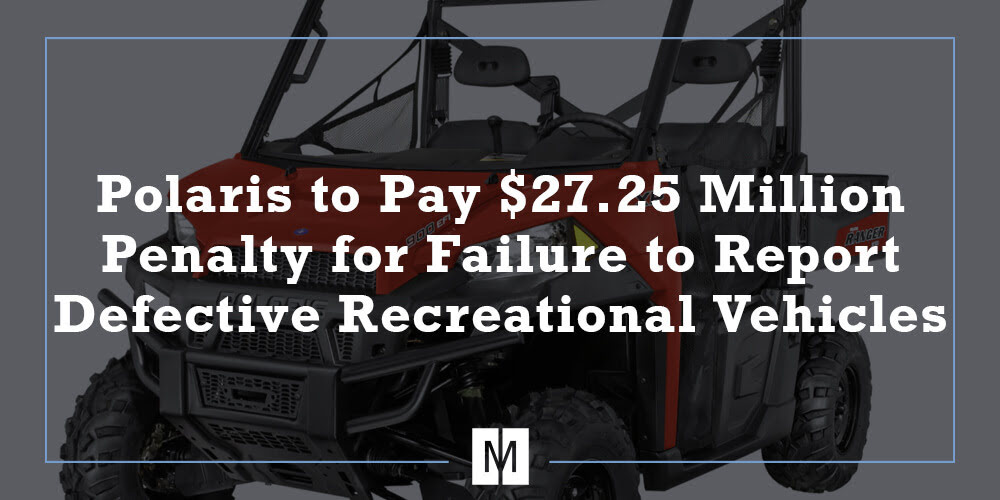 On April 2nd, Polaris agreed to pay a $27.25 million penalty for failure to report defective recreational off-road vehicles. The penalty was announced by the Consumer Product Safety Commission (“CPSC”), the leading government authority with oversight of product safety. While civil penalties are not uncommon, they are reserved for the most severe of circumstances when a product manufacturer knows or has a substantial reason to know of safety concerns for one of its products. The penalty is imposed for Polaris’ failure to report dozens of fires associated with Polaris RZR’s (commonly known as “Razors”) and Rangers. Both are popular off-road, multi-passenger vehicles.

Between the two models, upwards of 200,000 units are affected. Between 2013-2016 Polaris received a substantial number of reports of fires that, according to the CPSC, “[R]ZR’s could catch fire while consumers were driving, posing fire and burn hazards to drivers and passengers.” Affected RZR’s include the 2013-2016 RZR 900 and for 2014-2016, RZR 1000 ROVs.  Product manufacturers are required to report such safety issues to the CPSC. Polaris waited until upwards of 150 fires were reported for the RZR alone before notifying the CPSC. One incident resulted in the death of a young passenger. Eleven other burn injuries were among the reported fires.

The Rangers experienced similar events. Among the affected Ranger models are the 2014-2015 Ranger XP 900, XP 900 EPS and CREW 900 off-road vehicles. The products were defective in that the heat shield could fall off of the vehicles posing fire and burn risks.

While this action by the CPSC is meaningful in preventing future injuries, this action does nothing to protect those already injured or those at risk who currently own the affected models. At least some of the affected models are subject to recall. The CPSC has the authority to force a product recall, but such efforts do not extend to the compensation of victims. Products that have been recalled may face an easier course in product liability litigation, but victims still face a complicated uphill course before due compensation may be awarded.

Compensation for injuries caused by dangerous products falls within the larger category known as “product liability” law.  In order to recover compensation, a victim of even a recalled product must retain expert witnesses and prove that the product was defective, and accordingly, unreasonably dangerous. Product defect can be shown in one of three ways: 1) the product is defective due to an unsafe design that exposes the user or owner to danger; or 2) the product’s design is reasonably safe, but some error in assembly or manufacture has rendered the product defective; or 3) in spite of all due care, the product has inherent dangers that can only be reasonably avoided through careful warnings or instructions on proper use, and that such warnings/instructions are deficient.

Product liability law is a subset of personal injury law, but it requires a special level of expertise to navigate difficult rules pertaining to use of experts, time limitations, product misuse and the proper court’s jurisdiction. With cases involving recreational products, such as ATV’s, there may also be a substantial issue about the inherent risks users may assume when participating in the activity. Such risks can affect the ultimate recovery. At Monsees & Mayer, we specialize in cases involving ATV’s and other injuries associated with recreational activities and products.