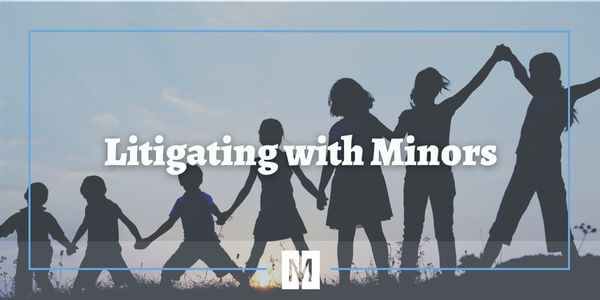 Minors present some interesting challenges to any litigation.  People under the age of 18, in Missouri, do not have legal standing to do many things in their own names.  Statutory procedures are in place that govern may of the situations one will encounter when a minor suffers a personal injury or inflicts personal injury on another.  There are different time limits that apply to different legal theories.  Hence, consultation with an attorney is necessary to navigate the varying issues presented when children are involved in civil litigation.

Can a Minor File a Lawsuit?

Whenever a minor is injured, he or she may have a claim for personal injury.  This rule applies to both physical and emotional injury (e.g. a fractured leg or the emotional trauma of abuse).  However, the lawsuit must be filed in the name of a “Next Friend.”  Usually, the next friend is a natural parent or legal guardian, but there is no legal requirement restricting the selection of a next friend to someone in those categories.  In short, any person capable of representing the interests of the child can be appointed on application and approval from the court.  Children over the age of 14 have to consent to the selection of a given individual.

Similarly, a child cannot represent his or her own interests in cases involving the wrongful death of a parent.  In the vast majority of situations, the minor is represented as “next friend” by a surviving parent.  Even in the rare circumstances when a minor is married and loses a spouse, a representative would still be appointed to represent the interests of the married, minor spouse.  Once any litigant reaches the age of 18, the need for a next friend no longer exists, and a minor can petition the court, when a case is already filed, to substitute himself as the proper party.

Statutes of Limitations for Minors

There are also different rules for time limits that apply for filing lawsuits to protect the interests of children.  Most states “toll” the running of the statutes of limitation until someone reaches the age of majority, but different states define the age of majority differently, sometimes even differing between the type of case.  In Missouri, for most theories of recovery, a minor has 5 years after he or she reaches the age of 21.  However, in medical malpractice cases, a minor only has 2 years after he or she reaches the age of 18.  In wrongful death cases, there is no “tolling” of the statute of limitations for minors. When someone is killed due to the negligence of someone, generally spouses, children and parents have a legal right to pursue a case for wrongful death.  Even if a child of the decedent, who is only 8 years old, is the sole surviving class member, there is no extension of the applicable time limit.  Generally, one has 3 years to file a lawsuit for wrongful death.

Settlements of cases also involve special procedures.  A minor lacks legal capacity to enter into contracts, and settlement is essentially a contract to resolve a legal dispute.  Hence, Missouri law (and the laws of most other states) requires a judge to approve any settlement.  The judge is essentially making an independent finding that the settlement (undoubtedly agreed to by the “next friend”) is fair and reasonable and in the best interests of the child.  In some situations, a guardianship estate is necessary to hold and manage the funds from the settlement until the child reaches the age of 18. Annual reports may be necessary from the guardian, and funds can only be used that are properly accounted for as in the interest of the child.

Can a Minor be Sued?

Finally, occasionally minors can also be sued for their wrongdoing.  Imagine if 8-year old Jimmy throws a rock that results in an eye injury to 7-year old Debbie.  While there may be issues in some cases about whether a small child even has the capacity to be negligent, a minor can be sued.  A parent or a guardian (somewhat the equivalent of a “next friend”) will be appointed to look after the interests of the minor.