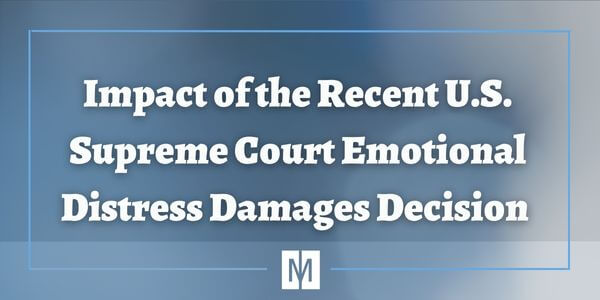 In April 2022, the U.S. Supreme Court (SCOTUS) ruled that emotional distress damages are not recoverable in a private action to reform the Spending Clause of the U.S. Constitution statutes. Cummings v. Premier Rehab Keller, P.L.L.C., 142 S.Ct. 1562 (2022). Here, we breakdown the decision, the impacts and what’s next.

Decision Overview and What It Means

The Spending Clause statutes provide certain protections for individuals at institutions that receive government funding. Those protections include discrimination on the basis of race, color, national origin, sex, disability or age. The Supreme Court has held that victims of intentional violations of the Spending Clause statutes (listed below) may bring lawsuits seeking to recover, among other relief, compensatory damages. Franklin v. Gwinnett County Public Schools, 112 S.Ct. 1028 (1992). In Cummings v. Premier Rehab Keller, SCOTUS held that the compensatory damages available under the below statutes cannot include compensating for emotional suffering.

The SCOTUS’s reasoning in Cummings that the Spending Clause legislation is comparable to claims for breach of contract, which generally do not allow for the recovery of emotional distress damages.

How the Ruling Impacts Victims of Sexual Abuse at Schools

Students at public schools, or schools that receive federal funding, are protected by the provisions of Title IX. If a student is sexually assaulted at school, by either a teacher or another student, Title IX allows that victim to bring civil claims for violating Title IX if administration at the school has actual knowledge of the discrimination and failed to adequately respond.

The ruling has an extensive impact on those who are discriminated against or who experience sexual harassment and abuse. Emotional injury can be just as or more damaging than physical injury. Being subjected to sexual abuse can have a life-altering impact. Although many victims are left to endure overwhelming physical consequences, the mental and emotional consequences are often debilitating.

Violations of the various Spending Clause statutes, including Title IX and claims for sexual abuse of students, are particularly likely to cause serious emotional disturbance. The ruling in Cummings takes away those victims’ ability to seek full justice for the trauma they have been through.

What is Happening Now?

We continue to see a rise in sexual abuse and harassment in the United States, and these traumatic events often happen within institutions or organizations. Learn about what options you have to hold those places responsible and obtain justice through the civil court.