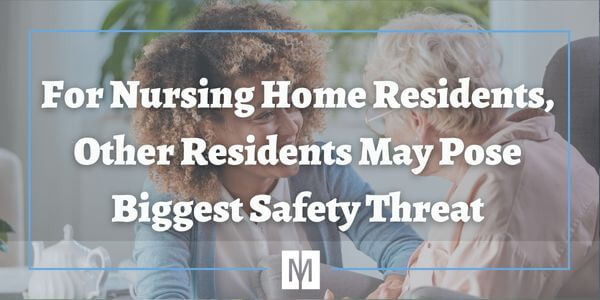 When most people hear about cases of nursing home abuse, they assume the guilty parties are nursing home staff members. While there are certainly many cases in which staff members are the perpetrators, other residents have increasingly committed such acts.

In a 2014 Cornell University study, 20% of nursing home residents reported “at least one aggressive encounter with fellow residents” during the last month. As the number of baby boomers in need of assisted living and nursing home care continues to increase, without intervention, instances of resident-on-resident violence will also increase.

People are living longer than ever today which means more are likely to develop dementia diseases. This can result in an individual experiencing confusion, fear, frustration and anxiety. In cases where residents with mental conditions interact with those with physical ailments, acts of aggression and violence may occur.

One especially tragic case involved an 84-year-old female resident who was severely beaten by a 77-year-old mentally-ill male resident. The family of the 84 year old recently filed a lawsuit against the nursing home, in which they assert the defendant was negligent in failing to protect the 84 year old from a resident who had a history of mental illness and physical violence.

Unfortunately, the majority of assisted living facilities aren’t able to safely house residents with both physical and mental conditions. As a result, residents who have aggressive and violent tendencies interact with those who are physically unable to protect themselves.