Filing a Civil Lawsuit against Your Abuser 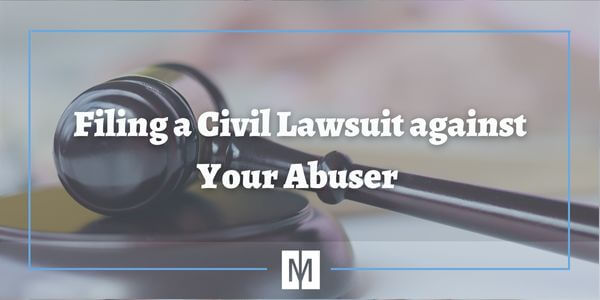 Approximately 27% of women and 12% of men have experienced some form of unwanted sexual contact at some point in their life. These alarming numbers demonstrate just how big a problem sexual abuse is in our country. Approximately 80% of abused children suffer from depression, anxiety, posttraumatic stress disorder, or other types of psychiatric disorder. The long-term impacts of sexual abuse can, and often are, overwhelming for victims.

Although perpetrators can face criminal penalties for their actions but having the perpetrator spend time behind bars does not help victims move forward from their suffering in most cases. For this reason, many victims explore civil options available to them.

Victims of sexual abuse or assault may be able to file personal injury lawsuits against their perpetrators. It is essential to understand the differences between civil cases and criminal cases surrounding sexual abuse.

In criminal cases, the law is used to punish the perpetrator for their crime. Your abuser will generally be sentenced to prison and have to pain substantial fines to the state. In some cases, abusers are required to register as sex offenders after they are released from jail. Although criminal sentencing has its benefits, filing a civil lawsuit against the perpetrator provides direct benefits to the victim.

Civil lawsuits allow victims to obtain compensation based on various damages they face. Civil lawsuits can be filed against multiple parties, such as schools, businesses, and other institutions, due to negligent supervision.

Filing a Civil Lawsuit against Your Abuser

Filing a civil lawsuit against your abuser can help you get the compensation you need and deserve. Many victims of sexual abuse suffer from mental health conditions after the abuse, which is why many victims pursue lawsuits. Legal claims allow victims to collect compensation to cover medical treatment, lost wages, pain and suffering, and a variety of other damages victims face as a result of their attacks.

Proving liability for an assault is easier if a criminal conviction is made. A legal rule, known as “collateral estoppel,” may allow you to enter evidence from the criminal trial into your civil lawsuit evidence. It should be noted that a lack of a criminal conviction in itself does not prevent you from getting the justice and compensation you deserve.

Adults who are subjected to sexual assault or battery have up to two years to file civil lawsuits against their perpetrators. This time is extended to five years for victims of sexual abuse.

Statue of Limitations give victims a small window of time to file suit against their abuser, and many states are opening up lookback windows to help shine a light on abuse, and to obtain recovery for victims.

Our Team at Monsees & Mayer PC Can Help You

Missouri sexual abuse attorneys at Monsees & Mayer PC understand the challenges abuse victims endure as they try to move forward. We strive to protect their legal rights and help them get the justice they deserve. Contact our personal injury law firm in Missouri at (816) 361-5555 to discuss legal options available for you.