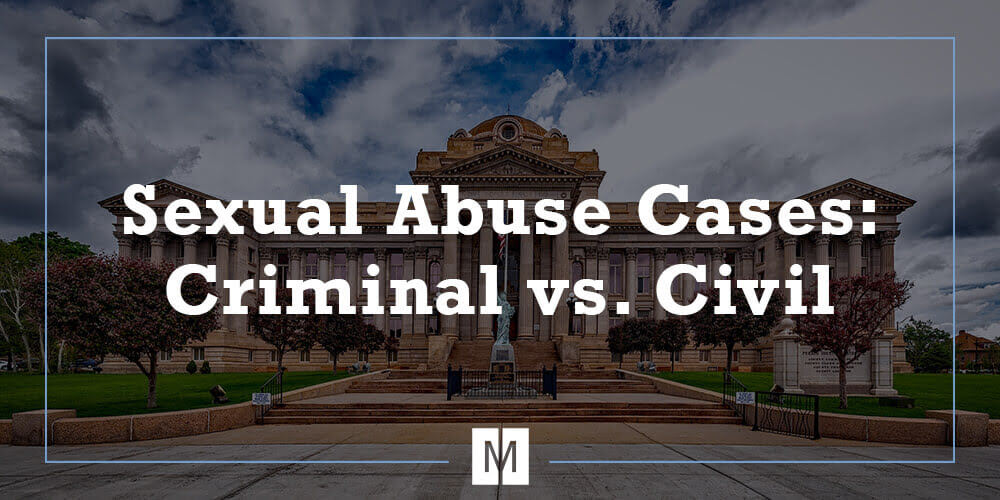 Criminal liability is imposed by the state or the federal government. That is to say, perpetrators have broken a law put in place by one or both of those governing parties. These crimes against victims of sexual abuse must be advanced by a prosecuting authority. While some restitution or money compensation may be awarded to victims and against perpetrators, as a general rule, the criminal courts are poor vehicles to obtain compensation for victims. The main goal of criminal courts is to impose prison sentences or fines.

Difficulties for the Victim

In addition, the rights of the victims are not protected in any realistic fashion. No attorney is present during the process to act as an advocate for the rights of the victim. The court may call upon the victim to lend testimony that will aid in a conviction, such proceedings can be embarrassing and demeaning, with no upside to the victim. While the criminal court system may facilitate connecting the victim to advocates that can assist with counseling and other needed support, the criminal justice system is largely powerless to compensate victims for the torment they have suffered and the lifelong emotional and financial consequences.

Nearly everyone has heard of the criminal standard of proof of “beyond a reasonable doubt.” In other words, for an individual to be convicted of a crime, the jury needs to be nearly dead certain that the defendant is guilty. Accordingly, there are many morally culpable people who can escape criminal liability because of doubt in the proof.

Civil Courts are There for the Victim

By contrast, the civil justice system is entirely about the victim. Your attorney will advocate for your rights, and yours alone. There is no vehicle, however, to punish the perpetrator with jail time. Typically the civil case is pursued after the perpetrator is already convicted and imprisoned. Often, and especially in instances of sexual abuse of a minor, there is also a criminal prosecution. But, a civil case can go forward whether or not there was a criminal prosecution.

Compensation for the Victim

Accordingly, the victim is allowed to seek money damages from the jury or court for the wide variety of damages that are inflicted as a result of sexual abuse:

The victim may be compensated by insurance covering the acts of the perpetrator or their employer. Insurance policies are confusing documents that frequently seek to limit the amount of compensation an insurance company may owe to compensate the victims of the insured-perpetrator. Hence, retaining an attorney well-experienced in this area not only increases the chance the rights of the abuse victim will be properly protected, but increases the likelihood that the vagaries of an insurance policy written to limit coverage can be interpreted to compensate the unique injuries and damages of the victims.

In most jurisdictions, the standard to prove punitive damages is high. In Missouri, one must prove that the defendant possessed an “evil motive” or was so insensitive to the rights of the victim that he or she acted with malice or conscious indifference to the rights and safety of the victim. If punitive damages are awarded, they are rarely covered by insurance, and can only be collected from the personal assets and income of the defendant perpetrator.

However, the overall standard of proof in a civil case is relaxed, compared to that of criminal cases. In a civil case, one must prove his case by a “preponderance of the evidence.” Missouri defines this standard as a juror must simply “believe” that the plaintiff’s case is more likely true than not. Most of us are aware of the “scales of justice.” To provide a mental image of the standard, the scales need to be merely slightly tipped in favor of the abused victim.