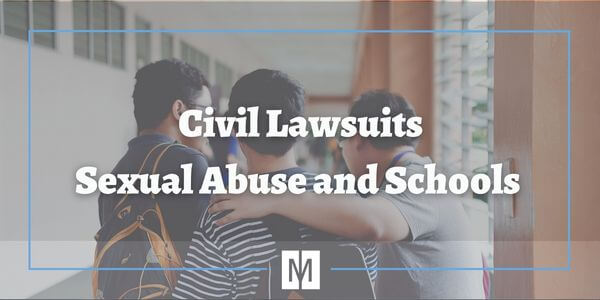 Sexual violence reports at schools are drastically rising.  From the 2015-16 school year to the 2017-18 school year, schools reported a 55-percent increase in sexual violence. Each year, students are sexually assaulted by other students and teachers. In certain situations, schools can be held liable for sexual abuse that occurs on their property or by one of their teachers/employees.  This article will discuss two laws that could impose liability on a school.

Title IX of the Educational Amendment of 1972

“No person in the United States shall, on the basis of sex, be excluded from participation in, be denied the benefits of, or be subjected to discrimination under any education program or activity receiving Federal financial assistance” 20 U.S.C. § 1681(a).  Title IX protects students from sexual harassment or violence and imposes liability on schools under certain situations.  In general, a school can be held liable under Title IX if it is (1) an education institution receiving federal funds, (2) had notice or knowledge of acts of sexual abuse, (3) that were sufficiently severe or pervasive to create a hostile (or abusive) environment, and (4) the institution was deliberately indifferent in response to such knowledge.

Often times, when a student is sexually abused by a teacher, one of the biggest obstacles is the notice or knowledge requirement.  The Supreme Court has refused to impose Title IX liability in situations where the school district failed to react to teacher-student harassment of which it should have known. The standard, instead, requires that the school have actual knowledge of acts of sexual abuse, which raises questions such as:

Who at the school must have knowledge?

What constitutes notice or knowledge?

The Missouri Human Rights Act is a state statute that also imposes liability on schools under certain conditions. Claims brought under MHRA have certain caps on recovery depending on the number of employees the school has.  The notice requirement, however, is a lower standard than the “actual knowledge” requirement discussed above for Title IX.  The notice requirement for claims brought under MHRA is “constructive knowledge”.  This can sometimes be described as requiring that the school knew, or should have known, of sexual abuse. This notice requirement is a very important element of the case, and it is critical that you speak with an experienced sexual abuse lawyer who is familiar with bringing civil claims of sexual abuse under the MHRA.

Missouri courts have held that a school is liable under the MHRA for sexual assault committed by its employees where it knew or should have known of the harassment and failed to take proper remedial action. Missouri courts have indicated that a school knows, or should know, of sexual harassment if information about the harassment came to the attention of someone who is reasonably believed to have a duty to pass on the information to someone within the company who has the power to do something about it.

Other benefits of bringing your sexual abuse claim under the MHRA is that the statute allows recovery of punitive damages, or damages to punish the school, if the facts are egregious enough, as well as the recovery of attorney fees.

Our Team Can Help You

Being subjected to sexual abuse can have a life-altering impact on a person’s life. Although many victims are left to endure overwhelming physical consequences, the mental and emotional consequences are often debilitating. When victims are sexually abused, it is crucial that they reach out to a personal injury attorney in Missouri to get the justice they deserve.

If you or a loved one have been the victim of sexual abuse by a schoolteacher, it is important you speak with an attorney who is experienced in litigating these types of cases.  The attorneys at Monsees & Mayer have successfully handled claims brought under both Title IX and the Missouri Human Rights Act and are available to speak with you to answer any questions you may have. Our team will diligently and thoroughly investigate your claim and the circumstances surrounding your assault to place you in the best position possible to secure. We will gather evidence and put together solid claims on your behalf to ensure you are able to get the justice and compensation you deserve. Contact our law firm today at (855) 458-8854 to see how we can help you.