Brain Injuries are Problematic in Football, but Not Just Football 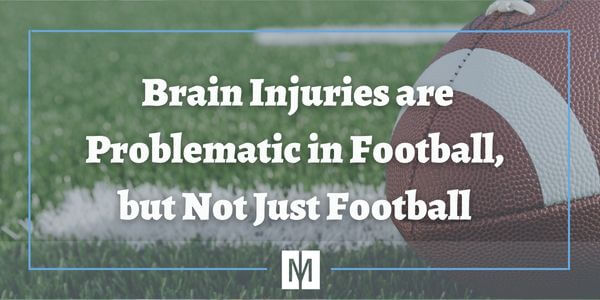 Brain injuries are serious and life changing. Traumatic brain injuries can physical harm involving a person’s development, memory, speech and many other body systems and functions. In many cases, the harm goes beyond physical symptoms to behavioral changes that alter who people are at their core.

Chronic traumatic encephalopathy (CTE) is caused by serious or repeated trauma to the head. Horrific incidents, particularly suicides, involving professional football players brought attention to CTE. After research studies and a widely publicized lawsuit, much of the focus remains on football safety, but should we broaden the scope?

There is no doubt that CTE is a problem in football. Family members of deceased National Football League athletes donated the brains of their loved ones, 91 in total, for research. Of those, 87 tested positively for CTE. Of all 165 football players beginning with high school age, 131 tested positive.

What about all sports? The Institute of Medicine and National Research Council noted in a 2012 report that football had the highest rate of concussions for high school athletes. The study covered other sports and found that hockey, soccer and lacrosse had problems too.

The American Academy of Pediatrics weighed in on the overall sports issue, pointing to data that shows cumulative sports concussions raise the risk by 39 percent for situations in which a catastrophic head injury could cause permanent neurological disability.

What about situations that have nothing to do with sports? Trauma to the head is trauma to the head. While the incidence rates may be higher in sports, and some sports more than others, CTE does not pick and choose its victims based on whether or not they play contact sports.

Military members, people diagnosed with seizure disorders and domestic abuse victims all had high rates of repetitive head trauma. Be vigilant, and if you or your child suffer any brain trauma, talk to a doctor and take precautions. If you believe that another’s careless actions caused the trauma, you have the right to talk to an attorney about a potential personal injury case.