Beware of Towering Thunderstorms this Summer when Driving 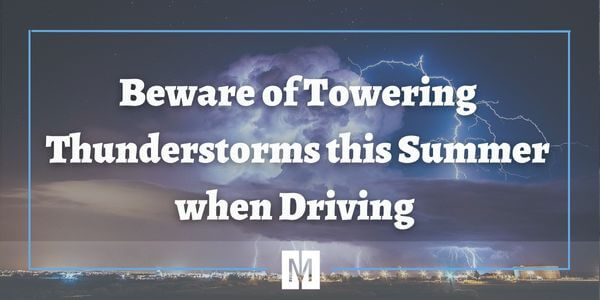 With the Fourth of July holiday, many people extend the holiday into a summer road trip. I-70, passing through Kansas City, is a major conduit for traffic moving east and west. In addition to the constant hum of large trucks, are additional passenger vehicles carrying motorists intent on making it to their vacation destination.

Summer driving poses fewer dangers weather-wise as compared to the threat of a snowy and icy winter road. The longer hours of daylight also provide better visibility for drivers, eliminating the risks caused by driving at night.

But summer highway travel still carries dangers for drivers. A crash in central Kansas last week demonstrated one of the particular threats of summer driving in the Midwest. A vehicle crashed near Windom, west of McPherson. Tragically, the two occupants of the vehicle, a 21-year old man and a 19-year old woman were killed when their car crossed the centerline and struck a semi-truck carrying grain on U.S. 56.

The Kansas Highway Patrol determined the crash was the result of hydroplaning. This occurs when the road surface builds up a layer of water that behaves like the nonstick surface of a frying pan, allowing the wheels of the vehicle to float above the road surface.

This a frightening condition for any driver, as it is akin to driving on glare ice, as the wheels lose all grip on the road. As this crash shows a driver is at the mercy of their surroundings when this occurs, and trees, utility poles, structures on the side of the road and any other vehicles, especially oncoming traffic can become instruments of death and destruction.

Apparently, a heavy thunderstorm was in the vicinity at the time. All motorists should exercise extreme caution during such storms, which can cause the sky to darken and rain and hail to fall in torrents, reducing visibility to mere feet and cause hydroplaning of vehicles traveling at the posted speed limits.

They also can lead to flash flooding, water ponding on the highway and swollen roadside ditches. Turn on your lights and slow down should you encounter such conditions, as the consequences of such a loss of control can be devastating.